Himalayan Balsam has an attractive flower, spreads very rapidly but is not a native species. 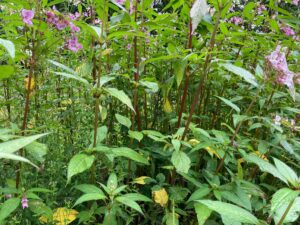 The problem is that, as it grows, it kills off all the other plants.  The good news is that it’s great fun pulling it up!

Pull – roots are shallow so come out easily

Shake – remove the soil from the roots

Snap – break the stem to stop it growing

Pile it up – watch the pile grow and then leave it, nature will rot it down! 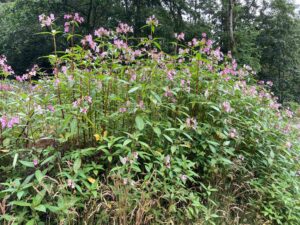 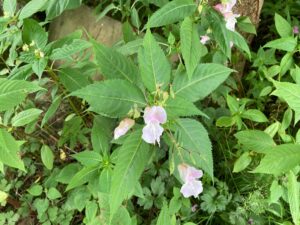 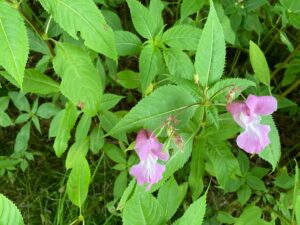 The Royal Horticultural Society (RHS) says Himalayan balsam is a tall growing annual, 2-3m (6-10ft) in height. Between June and October it produces clusters of purplish pink (or rarely white) helmet-shaped flowers. The flowers are followed by seed pods that open explosively when ripe. 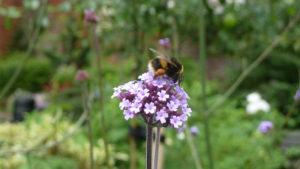 Professor Rick Battarbee FRS of the Change Research Centre, University College, London says: It’s important to remove the balsam and in its place restore a diverse community of native wildflowers.  Such a community will then support of variety of pollinators including honey bees but also other bees, hoverflies and moths.

Civic Pride Rossendale were going to organise a series of balsam bashing sessions but we know we’d get a lot more than 6 people so we’re suggesting you do it in family groups.  Every plant will have up to 800 seeds so an hours work will make a heck of  a difference.  The picture below was taken in 2019 before social distancing had even entered the langauge! 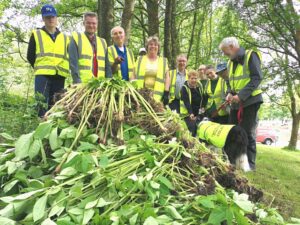 This site uses cookies - some of them are essential while others help us improve your experience.I acceptPrivacy policy