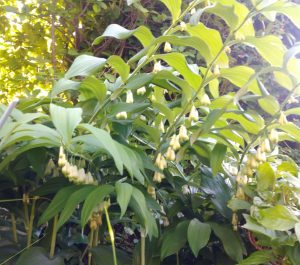 A little normality seeps into our lives this week, the traffic returns and the pace picks up. Since March, many of us have connected with our gardens and nature more than ever before and relinquishing that time doesn’t come without resentment. It’s been years since I spent so many hours within the boundaries of home, not since my children were tiny and gardening activity was reduced to the sort of damage limitation that only comes with toddlers and a football. As they grew older, I was able to bribe them to collect slugs and snails from the hostas, an obsession which eventually propelled the construction of a Snail Hotel made of leaves and twigs that appeared on the dashboard of my van during a Civic Pride Sunday morning session. Unfortunately, the guests had slunk out without paying their bill, and were slowly distributing themselves throughout the vehicle. 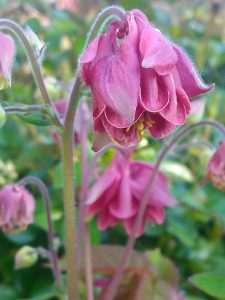 Now metamorphosed into teenagers, our garden holds none of the allure or promise it once did. Things change. From a gardening childhood I, too, stepped away, only to return in my 20’s and never leave. Seasons turn, and during my favourite time of year with all the promise of summer, gardens burst into life and I endeavour to catch up with all the splendour which beckon us outdoors. So what’s on the agenda this week?

3 of My Best Blooms
Our job is to stand back and admire…..leave some of the jobs, as nature can cope perfectly well and the world still turns if the weeding isn’t done.

Peonies are at their spectacular best in late Spring. Often quite wrongly judged as temperamental, they are, however, slow to establish. Be patient, if you take charge they will follow. There are three types: Tree, Herbaceous and a combination of the two called Intersectional. Fully herbaceous peonies will disappear over Winter, whereas tree and intersectional varieties have woodier stalks which remain all year. Despite a short flowering season, peonies really earn their rightful place in a garden, and in fact are very simple to nurture with just three things to remember:
1. Peonies love the sun and won’t flower as prolifically in shade.
2. Choose well drained, fertile soil as they are not keen on cold wet roots.
3. Don’t plant too deeply. The top of the tuberous root system should only rest 2-3cm below soil level.
Once you have them in the ground or large container, water well during the first season until established. Other than Peony wilt (a fungal infection of the foliage), they are relatively disease free and very low maintenance, just requiring staking if the blooms become too heavy in the rain. There are so many varieties to choose from, the colours ever more varied and producing such an incredible scent that I guarantee you’ll be a convert to the peony cause. If you’re looking to invest, then it’s best to buy them as 4-5 year old established plants from a local garden centre. 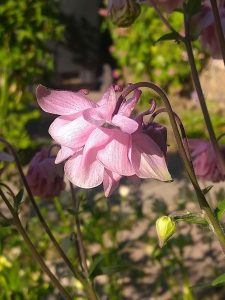 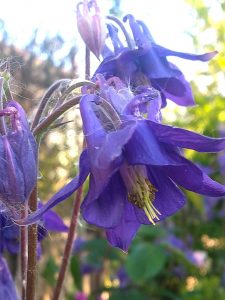 If you’re searching for something a little less showy than a peony, then Aquilegias fill many a gap in Spring borders. A truly old fashioned cottage garden flower, ‘Granny’s Bonnet’ self seeds, ignores pests and diseases and isn’t fussy about soil nor aspect. They are very much loved by bees and have two coloured bonnet shaped flowers often with long spurs behind. Colours range from white, pale pink and magenta to yellow. You can collect and sow your own seeds directly into tilled soil in early Spring, the small plants reaching maturity in 2-3 years. 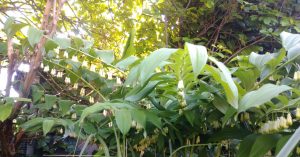 A shady spot is often the most difficult to cultivate, but try Polygonatum ‘Solomon’s Seal’ a herbaceous perennial with graceful arching stems and creamy white perpendicular flowers. Its runners spread underground without becoming too invasive, and every year it shoots up from the ground at a most impressive rate. Buy from a local garden centre and plant out in fertile soil this Spring/Summer for flowers next year. The only pest to blight polygonatum is the larvae of the grey sawfly. These chubby little caterpillars appear soon after flowering in June and completely defoliate the stems while you are eating your own evening meal. Easily removed by hand rather than chemicals, the damage never seems to affect the following seasonal growth. 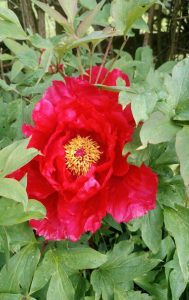 So, three plants I would never be without, which have grown happily in my own garden for 20 years in spite of anything I’ve done or neglected to do. The biggest peony is the only flowering plant from the original garden scape, and the aquilegia and Solomon’s seal both came as seeds and divisions from the garden where I grew up. As I said, the seasons turn. Enjoy your own Best Blooms this week.

This site uses cookies - some of them are essential while others help us improve your experience.I acceptPrivacy policy